The objective of the Foundation 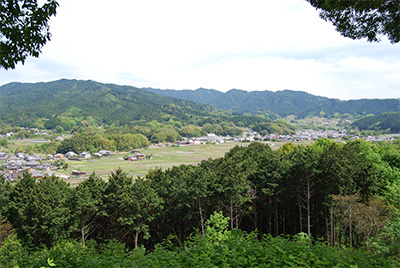 One may call the Asuka district a home land of Japanese hearts.
About one hundred years, from the reign of Empress Suiko to Emperor Tenmu, this region was the capital of the growing nation. In this period (the Asuka era), Japan was unified into one country and foundation of the nation was set. It was at this time that this country adopted much of the relatively matured culture of the continent. Buddhism was introduced to this place and ancient Japanese culture saw its prime flower here.
Many archaeological sites, such as ruins of imperial palaces, Buddhist temples, shrines and burial mounds from 7th century are clustered in this area, testifying the development of early Japanese history. And natural landscape still showing the traces of scenes admired by Manyo poets recalls in our mind a yearning for the ancient times.
Yet the wave of land development of present time is reaching to the surrounding area of Asuka. If the situation is left to take its own course, this area would be encroached by this wave and precious historical heritage of the nation would be destroyed by and by.
We appealed to the government and to the general public the need of national movement for the protection of Asuka district in this situation.
In response to our appeal, the government adopted a resolution to preserve the area in a Cabinet meeting in December 1970. It consisted of an regal act for area preservation, a decision to support the improvement of environment and the welfare of present residents. We appreciate this resolution of our government as a first positive step for the preservation of Asuka.
The policy of the government is a very important factor, but a policy alone is not sufficient to accomplish the aim, and the government pleaded for wide cooperation of civilians in various aspect.
The Asuka Preservation Foundation was established, by those who are concerned to the matter, to promote the movement from the side of civilians, joining hands with the national and regional government.

History of the Foundation 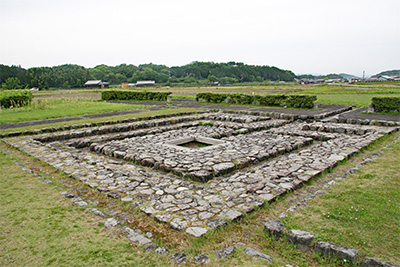 Since 1971 positive movement for the preservation of Asuka has been continued.
By the request of the first chairman of the board of the directors, Mr. Matsushita Konosuke, the prime minister SATOU and his cabinet members made a tour of inspection to Asuka in May 1970. At the same time "The association of the Members of the Diet to preserve the ancient capital of Asuka" was organized. In December of the same year, a resolution of the cabinet meeting for the policy of Asuka preservation was adopted in accordance with reports of the Council of historical Climate and the Council of Cultural Properties. In April of following year, the establishment of the Asuka Preservation Foundation was approved.

Postage stamps including donation were issued, after the discovery of the Takamatsuzuka Kofun. (September 1972)
The "Asuka General Information bureau" was completed in the station yard of the Kintetsu line "Asuka". (January 1972)
The lodging for public education "The Iwaido-so" was opened in the Iwaid area of the Asuka National Historical Park. (March 1974)
Old farm building in Ikaduchi area was dismantled and reconstructed in the central area of the village to house the" Asuka Folk Customs Museum". (September 1974)
The "Takamatsuzuka Mural Hall" was completed. (March 1977)
Emperor Showa's journey to Asuka. Visited the Takamatsuzuka Kofun and the Takamatsuzuka Mural Hall. (December 1979)
First issue of seasonal magazine "Asuka kaze". Open lectures, on site study and a symposium were held. (October 1981)
Japan-Korea intercultural symposium. (October 1982)
The second chairman of the board of the directors, Mr. SAEKI Isamu took his position after Mr. MATSUSHITA. (March 1984)
The prime minister of the time, Mr.NAKASONE's visit to the Asuka Mural Hall. (October 1983)
Memorial exhibition of the fifteenth anniversary of the Foundation, Japan-Korea intercultural photo exhibition. (October 1986)
The third chairman of the board of the directors, Mr. UEYAMA Yoshinori took his position. (March 1990)

Facilities of the Foundation 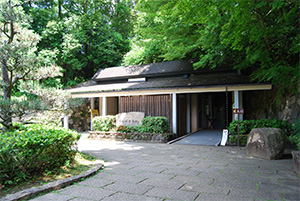 Reproduction of "Beauty of Asuka" more than a thousand years old.

In March 1972, the Takamatsuzuka Kofun was aroused from its thousand and several hundreds years of slumber in the excavation of the Kashihara Archaeological Research Institute commissioned by Asuka village.
Richly colored wall paintings and precious grave goods found in the crypt were said to be the most important archaeological discovery in Japan after the second world war.
The wall paintings were designated to national treasures, and the tumulus was designated to a national historical site. The crypt was tightly sealed to preserve the wall paintings.
To raise the fund for the preservation the paintings and protection of the surrounding environment, the Ministry of Posts and Telecommunications issued memorial stamps including donation.
Receiving this fund the Asuka Preservation Foundation made a public garden around the tumulus and constructed the Takamatsuzuka Mural Hall to exhibit the reproduction of the sealed paintings.
The Hall was opened to the public in March 1977, and in December 1979 the Emperor made an official visit to this hall.
In here, visitors can see copies of wall paintings in excavated condition, in partially restored and in fully restored conditions, along with the full-sized replica of the crypt and burial goods.
The Hall showing the full particulars of the Takamatsuzuka is one of the inevitable spots for the site seeing in Asuka.